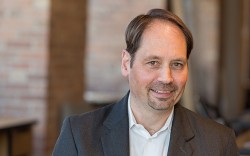 David Mann is a Principal and Director and joined Booth Hansen in 1995. David is a key member of the leadership team, managing business operations, clients and projects with a focus on the academic and cultural projects. With a clarity and focus on the mission of higher education, he has successfully guided more than a dozen noted projects for colleges and universities such as the University of Illinois Chicago, University of Chicago, University of Illinois Urbana-Champaign and Northwestern University. David most recently completed the University of Illinois Chicago’s Computer Design Research and Learning Center and the University of Illinois Urbana-Champaign’s Illinois Street Residences Dining + Student Center of which is the nation’s largest non-military dining facility. David has also worked with numerous cultural clients to design meaningful spaces, of which included the Kohl Children’s Museum in Glenview, Illinois, where he contributed to the Museum receiving several awards, and multiple projects for the Chicago Botanic Gardens.

David oversees internal firm initiatives to help facilitate a collaborative culture and is a leader for the firm’s internal Sustainability Team. He also supports his alma mater and guides the Virginia Tech Chicago Studio as they utilize Booth Hansen’s offices as their working space.

David earned his Bachelor of Architecture from Virginia Tech and is a registered Architecture in the State of Illinois.